Ventricular premature contractions or Premature ventricular contractions (PVCs) are extra heartbeats that begin in one of your heart's two lower pumping chambers (ventricles). These extra beats disrupt your regular heart rhythm, sometimes causing you to feel a strong beat or skipped beat in your chest . 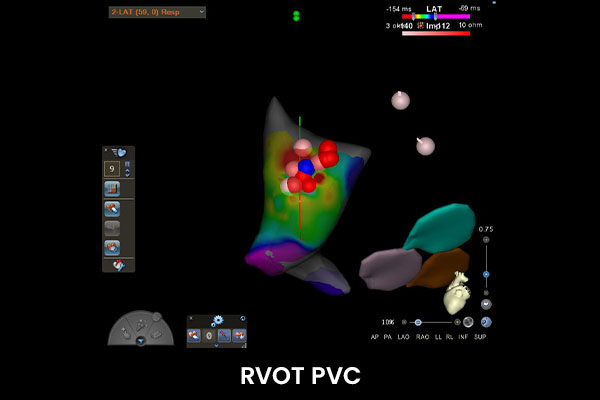 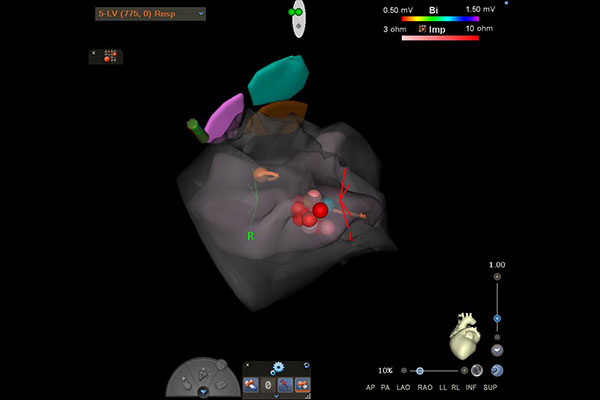 The diagnosis of PVC can be done on 12 lead EKG (helps with localizing the area of origin) and Holter monitors. The 24 hour Holter can help to assess the PVC burden (number of PVCs in 24 hours calculated as % of the total heart beats in 24 hours). The other tests that help with the treatment plan are echocardiogram and stress test (or left heart catheterization).

Typically treatment of PVCs are done when

The available options include antiarrhythmic medications and catheter ablation. The origin of these PVCs can be from a number of locations including the RV outflow tract, the LV outflow tract, the distal great cardiac vein/anterior interventricular vein, the aortic valvular cusps, the proximal pulmonary artery or the left ventricular endocardial surface. These are typically mapped in the EP lab during the procedure until the PVC origin is located and then perform catheter ablation. The benefit of the catheter ablation is the possibility of high 95-98% success and complete symptom relief. If the catheter ablation is successful, antiarrhythmic medications can be stopped.

Patients with heart failure and structural heart disease have a decreased heart pumping function and reduced "ejection fraction". This means the lower ventricles, typically the left ventricle, is either thickened or dilated with decreased contractile function. This dilatation and enlargement of the left ventricle can lead to areas of fibrosis and replacement of muscle tissue with scarring. As well, coronary artery disease itself, with a history of myocardial infarctions, or "heart attacks", leads to scarring of the heart with dilatation and segmental areas of poor contraction. This scarring and dilatation of the left ventricle can lead to the initiation and perpetuation of ventricular tachycardia (VT).

It is these areas of myocardial scar in the ventricular tissue that serves as the primary mechanisms for initiation and perpetuation of VT related to coronary artery disease. Scar tissue leads to slowing of electrical conduction in the ventricular muscle tissue. This slow conduction is the nidus for the initiation of this reentrant rhythm originating from the ventricles. Scar-related ventricular tachycardia can spontaneously occur in these patients leading to hemodynamic collapse and sudden cardiac death. The role of empiric prophylactic implantable cardioverter defibrillator (ICD) therapy in this population of patients with depressed left ventricular function (ejection fraction, EF) is discussed in the ICD section to follow. Acute myocardial infarctions can also lead to VT and sudden cardiac death as the heart muscle's blood supply suddenly ceases due to an acute coronary artery blockage.

The diagnosis of VT is typically based on capture of the rhythm disturbance on a 12-lead EKG or outpatient monitoring system, such as a Holter or Event monitor. Your physician can make this determination with clues from the careful inspection of the initiation, continuation, and perpetuation of your tachyarrhythmia. In general, VT tends to be a wide-complex rhythm as opposed to narrow-complex typically seen with supraventricular tachycardias (SVT). However, this is not necessarily true 100% of the time, with some SVT appearing wide at faster rates, making the concrete discrimination between the two difficult at times.

Therapy for VT is based on many different factors. First and foremost, patients will need to be on optimal medical therapy for their cardiac condition. Those patients with heart failure will need to be on maximal medications and avoid episodes of decompensated heart failure leading to hospitalizations. As well, patients with coronary artery disease will need to be on optimal chronic medical management to limit the progression of disease and recurrent myocardial infarctions. In situations with recurrent episodes of ventricular tachycardia, your physician will likely recommend tiered therapy with antiarrhythmic medication and implantation of an implantable cardioverter defibrillator (ICD).

The goal of antiarrhythmic medication is to reduce the episodes of symptomatic life-threatening VT.Ventricular tachycardia is indeed the most dangerous of the cardiac arrhythmias, with a real risk of sudden cardiac death. Antiarrhythmic medications can act to slow ventricular muscle conduction and therefore disturb the formation and perpetuation of these reentry loops; or they can reduce the ability of the ventricular muscle tissue to be electrically excited and conduct the rhythm disturbance. Your physician will tailor your medication therapy based on your other history and medications. Most antiarrhythmic drugs carry a small risk of "pro-arrhythmia", that is of causing secondary heart rhythm disturbances, therefore careful consultation with your physician is important. Finally, antiarrhythmic medications will not protect you completely from recurrent episodes of VT and sudden cardiac death.

ICD therapy is recommended not only for those patients with structural heart disease and recurrent life-threatening VT, but also empirically (prophylactically) for patients with diminished left ventricular (LV) heart function, with scientific studies pointing to LV function less than 35% as a high-risk group. Your physician will typically make an assessment of your heart function that will be reported as a percentage "ejection fraction". A normal ejection fraction is 55%. This assessment of your LV pumping function can be performed via multiple tests including a heart ultrasound (also known as an echocardiogram), nuclear stress test, cardiac MRI or CT scan, or a MUGA scan. This value is extremely important, and has implications for your long-term medical therapy and outcome. Ejection fraction is a powerful tool to classify those in the population with a higher-risk of sudden cardiac death.

If your ejection fraction is below 35%, you are at a higher-risk for sudden cardiac death over the next several years and your physician may recommend the placement of an ICD for primary prevention (that is to prevent future episodes of sudden cardiac death that may arise from an arrhythmia). If you are having recurrent VT or are a survivor of an out-of-hospital sudden cardiac arrest, your physician will also likely recommend you for evaluation for an ICD. The intricacies of the ICD function will be discussed in the ICD section, but a short synopsis is in order. An ICD essentially consists of a "generator" with circuitry that allows the interpretation and monitoring of your cardiac rhythm 24 hours a day, seven days a week. This generator is connected to "intracardiac" leads that are placed into the heart by your physician, typically via one of the upper chest veins.

This procedure is performed with both local and general sedation, with an average implantation time ranging from 1-3 hours. The "intracardiac" leads allow for direct contact with your heart muscle. This is how monitoring of your heart rhythm is accomplished. All current ICDs can function as a pacemaker if needed. If your ICD detects a ventricular tachycardia or fibrillation episode, it will charge its battery and deliver an electrical shock directly into the heart via the "intracardiac" leads. This is essentially an electrical cardioversion, but performed from inside the heart. The electrical shock will electrically capture all of the heart muscle cells and interrupt the reentry circuit with termination of the tachycardia and resultant normal sinus rhythm.

As medical technology advances, the ability to localize and treat ventricular tachycardia and terminate the rhythm disturbances with the use of catheter ablationtechniques has evolved. Depending on the burden of your VT and its location of origin inside your heart, your physician may recommend that you undergo an electrophysiology study (EPS) and catheter ablation. Not everyone is a candidate for a VT ablation. Your physician will make that assessment. Typically, if you are suffering from recurrent ICD shocks with repetitive episodes of VT despite medical therapy, you may be a candidate. With this technique, your heart rhythm specialist will place several catheters into the vasculature from the groin under sedation and then proceed to electrically map the site of origin of your VT "reentry circuit". These techniques are discussed further in the EPS and catheter ablation sections. However, by trying to reproduce your VT in the EP lab of the hospital, your heart rhythm specialist can attempt to trace the origin of the electrical circuit that leads to the initiation and perpetuation of this dangerous rhythm. With the delivery of radiofrequency, or heat energy, from the tip of the mapping ablation catheter, the local tissue responsible for the perpetuation of the VT can be destroyed, thus interrupting the circuit. This technique has the potential to significantly reduce your burden of episodes of VT, and possible ICDshocks. However, despite a successful catheter ablation, some patients will develop a different VTin the future that will need to be treated; structural heart disease is a chronic disease, with the only true protection from sudden cardiac death via an implantable cardioverter defibrillator (ICD) system.

Ventricular tachycardia can also occur in patients with structurally normal hearts, unrelated to any history of coronary artery disease. It can occur in both the young and the old, and can be a benign, potentially treatable and curable condition. Unlike ventricular tachycardia due to coronary artery disease with scarring or a dilated left ventricle, these types of VT are typically caused by a "focal" mechanisms. In other words, there is no "reentry" loop necessary to initiate or perpetuate the rhythm, but rather a "focal" site of irritable ventricular tissue that fires faster than the normal sinus node pacemaker to lead to a wide-complex rhythm on the EKG. This site can be located anywhere within the ventricular muscle, but a particular form of "outflow tract" VT is more common and well-described. Ventricular tachycardia in this situation can be treated with medications, with typically significant reductions in the frequency and duration of episodes. However, some patients do fail medication therapy and can be amenable to "curative"catheter ablation procedures. These ablation procedures, as described above, are performed in the hospital. Your heart rhythm specialist will careful map the electrical circuit of your VT with intracardiac catheters, looking for the earliest site of activity, or origin, of the arrhythmia. Using a specialized ablation catheter, radiofrequency, or heat energy, can be delivered to this irritable tissue with eradication of the tachycardia circuit. Not every patient has a benign course or can be offered a catheter ablation procedure. As technology and medicine improves, it is becoming clear that some patients suffer from syndromes, likely familial, with recurrent VT and even ventricular fibrillation. A careful discussion with your heart rhythm specialist is important to delineate your condition and therapy options, including the need for an implantable cardioverter defibrillator (ICD). 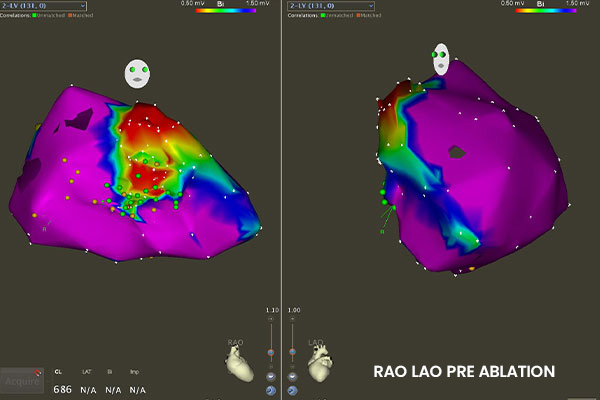 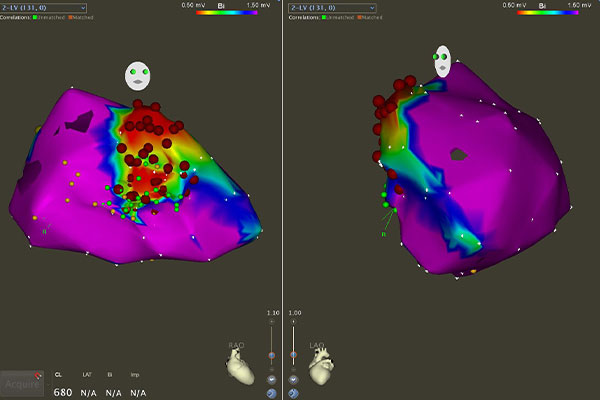 Ventricular fibrillation is the most frequent mechanism of sudden cardiac death (SCD). It represents chaotic, disorganized ventricular activity, greater than 300 beats/min, with essentially no organized ventricular activity or contraction, with resultant hemodynamic collapse. Ultimately, VFleads to "asystole", or flat-line, with no cardiac electrical activity and essentially cardiac death.

The primary acute Physician Consultation for VF is an electrical cardioversion to save the patient's life. Afterwards, a careful work-up of the medical condition that triggered the episode is paramount. There are many causes of VF, including: an acute myocardial infarction (a "heart-attack"), ventricular tachycardia with degeneration of ventricular activity, Brugada syndrome, long QT syndrome, short QT syndrome, catecholaminergic polymorphic VT syndrome, and idiopathic familial syndromes; as discussed earlier, WPW with uncontrolled heart rates during episodes of atrial fibrillation has a rare, but real possibility of inducing ventricular fibrillation and death. Survivors of sudden cardiac death secondary to VF will need to undergo a careful discussion with their physician regarding Cardio rhythm specialist advice options, and if appropriate, implantation of an ICD.

Need a Doctor for Check-up?